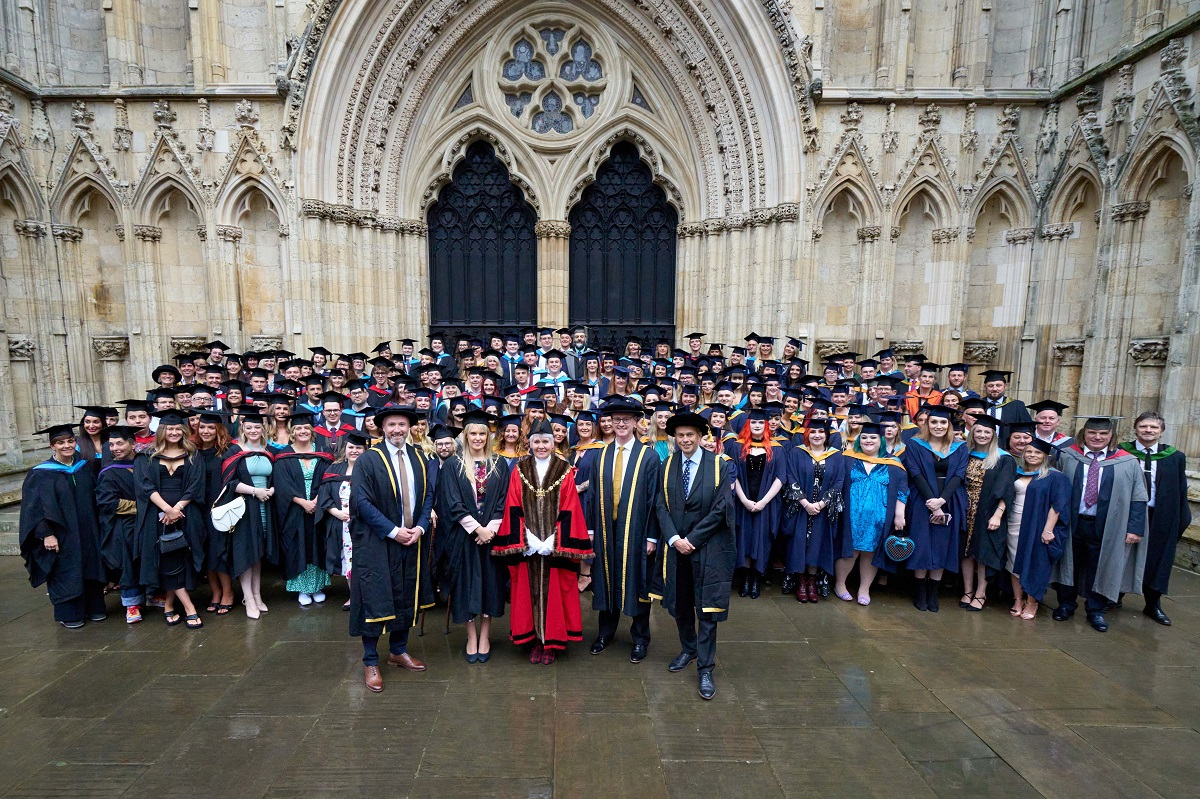 THE success of York College University Centre’s students was celebrated in York Minster at a graduation ceremony on Thursday.

Graduates from a number of study areas gathered at the Minster, where their hard work was celebrated by York College Chief Executive and Principal Lee Probert, before an audience of VIP visitors, family and friends.

Amongst the 129 graduates was Dom Smith, 35, who received his Level 4 Diploma in Therapeutic Counselling. He said achieving his diploma was hard work but had made him ’a better person’.

He said: “I’ve graduated before but this is, without doubt, the most special. It’s the most personally challenging thing I’ve done.

“I always wanted to go into counselling because I thought I was a good listener but when I started the course I realised I knew nothing. Studying has made me a much better listener and it’s made me a better person; I’m more mindful of myself and others.”

Dom has since found employment with the national counselling service Disability Plus.

Wayne King, 29, from Sherburn near Scarborough, has begun a career in teaching after achieving his Postgraduate Certificate in Education (PGCE).

“I’m ecstatic to be finished,” he said. “I worked right through the Covid pandemic, which was difficult, but it makes it very satisfying to be here today.”

Lorna Howard was at the graduation with her parents after successfully completing her HNC Level 4 in Construction and the Built Environment.

She began the course after starting out labouring in the family’s construction business in Goole.

“I’ve had a great time at York College,” she said. “The tutors have been brilliant. I’m hoping to eventually run the family business.”

Speaking to the graduates and their guests in York Minster, York College’s Chief Executive and Principal, Lee Probert reflected on the words of HM Queen Elizabeth II, who said ‘it is often the small steps, not the giant leaps, that bring about the most lasting change’.

Mr Probert added: “Whatever you do next, wherever you go next, however big or small the step you take, you have already achieved great things, and can continue to do so.

“Never lose that thirst for learning, to think differently and to challenge and push boundaries.

“I am enormously proud of all that you have achieved so far and look forward, through our Alumni Association, to finding out more about your future successes.”

Sarah Barbacane, York College’s Director of Curriculum: Professional & Commercial Industries, added: “Once again we have a group of students who have achieved something really special, despite the challenges of studying through a global pandemic.

“I’m so proud to play a part in this ceremony and to be able to celebrate their success.”

Before receiving their certificates, the graduates were also addressed by guest speaker, two-times paratriathlon gold-medallist Steve Judge, who provided an inspiring account of his gold medal win at the Beijing World Championships in 2011.

Other VIP guests were:

The ceremony also saw six students receive Special Awards, including the Principal’s and Governors’ Awards, for their commitment to York College’s values, throughout their studies.

York Colleges graduation ceremony for 2023 will take place on September 21, in York Minster.