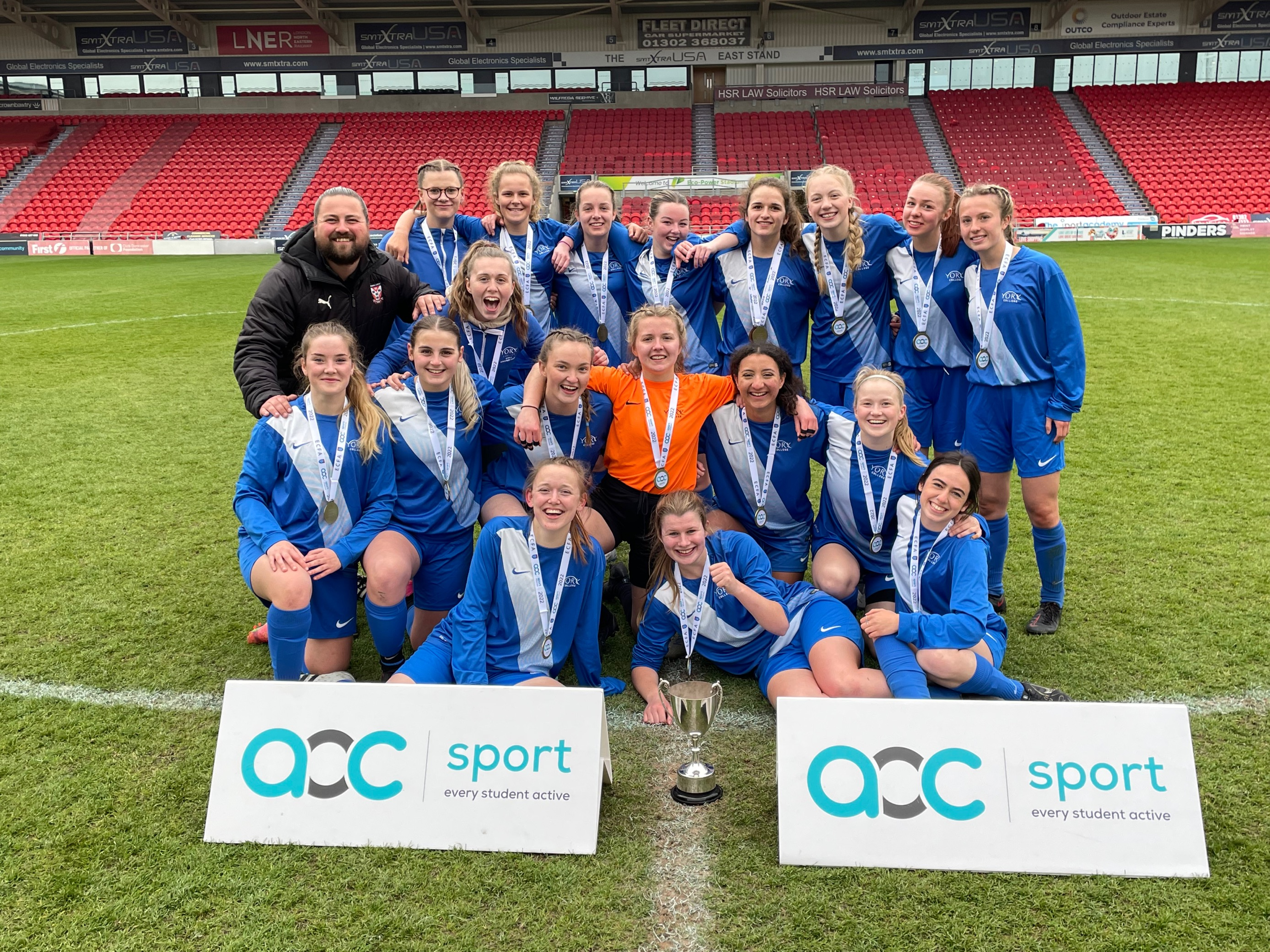 It had all come down to this – two teams from England and Wales were playing in the final to decide the 2021-22 ECFA National Cup Champions.

The York College team were back, fresh from two weeks in Valencia, having trained with Spanish coaches and played against some of La Liga’s top women’s U18 teams.

From the first whistle York were the better team, though chances came and went, including Jess Crosby hitting the inside of the post. As if to emphasise the lack of good fortune Thomas Bennett’s first attack saw them score from an outrageous deflection which looped over Evie Elsworth.

A goal down but the York players didn’t flinch as they continued to dominate possession and create chances. A second break away and Thomas Bennett scored a very good goal from distance to put us 0-2 down while the opposition had barely had a kick.

Still the York players pressed and still the chances kept coming before what could have been a killer blow. A long hopeful ball over the top caused indecision in the York back line, with Evie slightly misjudging the bounce. The Thomas Bennett striker collected the ball and tapped it into an empty net. Four minutes later the half-time whistle blew and the York players walked off in disbelief at the score-line, despite their performance.

At half-time in the changing rooms there was a mixture of disbelief at the score, mixed with absolute belief that York could still win the game.

The second half started and within two minutes York had a penalty after Jess Crosby drew a late challenge from a defender. Hannah Langford stepped up to smash the ball past the goalkeeper who had guessed the wrong way. Game on!

Two minutes later and Rosie struck a half-volley from the edge of the area straight into the bottom corner. Four minutes into the second half and the score was starting to look a lot more realistic.

York continued to press forward and were dominating possession. Any half chances created by the opposition were superbly dealt with by Evie who was showing no after-effects from the first half. As the game entered the final 10 minutes the ball was constantly in Thomas Bennett’s half.

Soon after, a cross from the left caused panic in the opposition penalty area and, as the ball bounced around, substitute Chelsea Haskins scuffed what was the most beautiful of ugly goals bringing the score to 3-3 and into extra-time.

As the players came in for a quick chat and drink before starting an extra 30 minutes, their confidence was sky high after saving the game in 90 minutes.

Extra time saw York continue to dominate, with the game being played in Thomas Bennett’s half. Then, just before half-time of the extra minutes, Jess Crosby was rewarded for her tireless running.

A ball played through to her, and a simple toe-poke put it past the Thomas Bennett goalkeeper, bringing wild celebrations from the bench and York College supporters. Going into the final 15 minutes York were encouraged to continue their dominance and create chances to put the game out of reach. With six minutes to go, left-back Hannah Langford took control of the ball and from 35 yards out, flew the ball into the top corner and in off the angle of post and bar. Pure emotion was on her face as she ran to the bench and was engulfed by her teammates.

The game was won at 5-3 and came after 120 minutes of football which were a wonderful advert for female college football. The York players were incredible and showed the most fabulous resilience to achieve the result they deserved for the work they put in this season.

A game, a score-line and a team that will live long in the memory of York College.

Player of the match, Rosie Bell said: “We never doubted ourselves. Even at 0-3 down at half-time we knew as a team we could still win the game.”