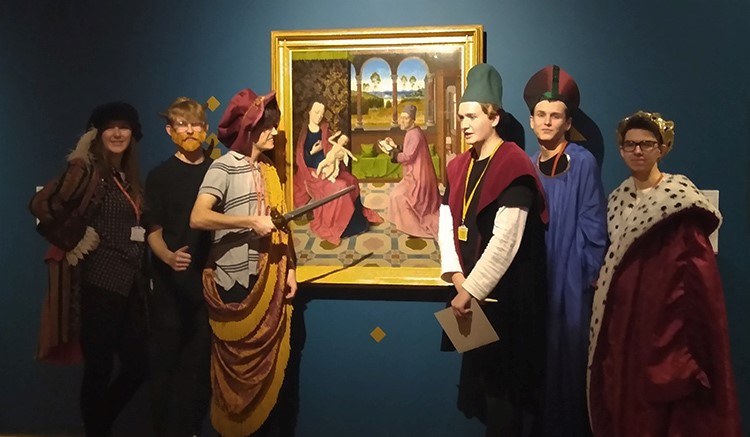 Creative Media Production students from York College, working with York Art Gallery, have developed and created interpretive media materials in response to the Making of a Masterpiece: Bouts and Beyond exhibition, featuring St Luke Drawing the Virgin and Child, an exceptional 15th century painting attributed to the workshop of Dieric Bouts the Elder, showing at the Gallery until 26th January.

In a project run as part of the Gallery’s learning programme, funded by the National Heritage Lottery Fund, a group of six Extended Diploma Creative Media Production students worked alongside freelancer, Griselda Goldsbrough and York Museums Trust teams, to help the Gallery attract a younger audience to the Bouts exhibition.

The students created a behind the scenes video looking at contemporary intervention artist Chris Cook who has responded to the historical artwork. Their video looked at Dutch work as inspiration and includes them speaking to members of the Gallery team.

Students Ewan Wild and Oliver Nicholson were inspired by the results of their work, saying: “The project helped the student team to develop skills working with a real client rather than creating something purely for ourselves. It was great conducting the public interviews and making media materials, they allowed us to bring a younger audience to the iconic York Art Gallery.”

Griselda Goldsbrough, who worked with the Creative Media students, said: “Their work has been really interesting. They looked at the idea of a “masterpiece”, and spoke to people, asking the question “What Makes a Masterpiece?” Their aim was to get a better understanding of the different ways the word is used and interpreted by different people, particularly those around their own age. Their short film shows the responses, which are shared online, and which were showcased very successfully at a special preview event held at York Art Gallery, where everyone, including special guest Chris Cook, was intrigued to learn ‘what makes a masterpiece’.”

Scott Langford, Creative Media Tutor at York College said: “Projects like this are so important to us and we are very grateful to Griselda Goldsborough, York Museums Trust and the York Art Gallery for the opportunity. It has been an important and challenging experience and our students responded well in terms of their exploration of a theme and how to apply their creativity and technical skills in a real-world scenario. The event itself provided an opportunity to see how others experience the work and the exhibition. Being able to show student work is fundamental to their progress and success on the course, and their personal development.”