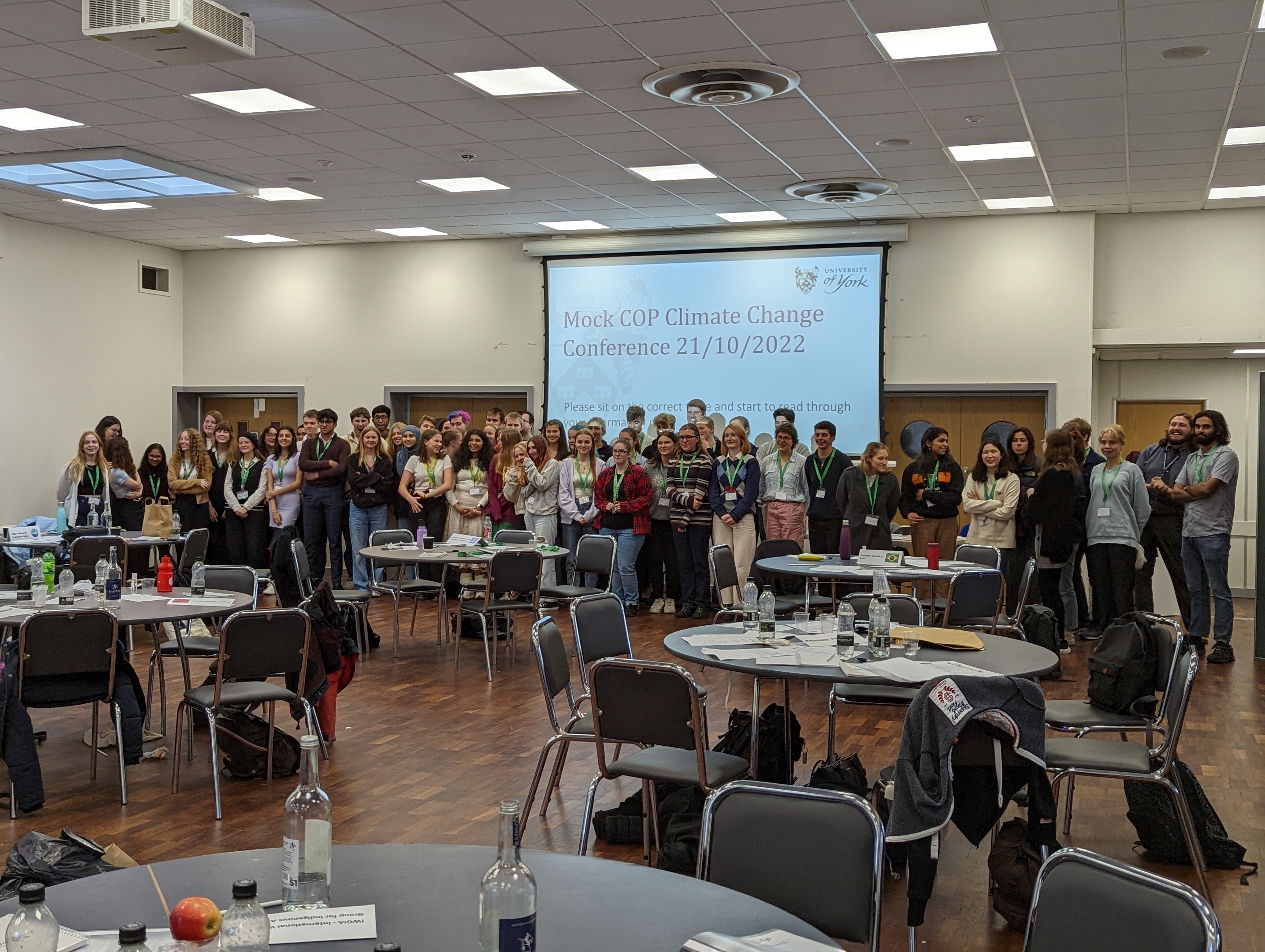 Aimed at providing an insight for young people into the challenges of international climate negotiations, the Mock COP Climate Change Conference was held at York University ahead of the COP 27 event in Egypt. York College student, Lucy Shirt, was one of the delegates at the event, and has written about her experience…

The event provided me with an excellent opportunity to learn more about the policies surrounding the climate crisis, so I was keen to get involved. We were put into three teams which represented some of the different nations and organisations involved in the policies around climate change: the United Nations High Commissioner for Refugees (UNHCR), Sweden and the UK. My team was the UNHCR.

It was really interesting being part of this team because I wasn't previously familiar with the role of climate refugees in this debate, and it was great to get a new perspective of the impacts of climate change.

We heard from professionals in the climate change field who outlined the day and told us more about the importance of combating climate change.

We had the chance to discuss seven different policy areas ranging from funding climate aid, our stance on transport, our priorities for farming and how we deal with climate refugees. It was our role as the UNHCR to promote the housing of people forcibly displaced due to the impact of the harmful use of fossil fuels and bad practices.

Each team had its own policies to promote, and deals between nations and organisations were soon made. We spoke with Brazil and Sweden directly in discussions over what policies we each prioritised, with my team trying to influence others to support our stance on refugees. After a free-for-all discussion period between parties a vote was held for each of the seven policy areas.

I really enjoyed the experience and, judging by the enthusiasm of the other teams, everyone else did too. I'm glad to have taken part in the Mock COP event as it has helped me understand more about the complexities of protecting our climate.

It was particularly informative as I am planning on studying Environmental Science at university and aiming to take on a role within the community, attempting to solve the planet's climate issues.

Events like these are important and great to get involved with because it allows you to get more of a real-world understanding of what's going on around us and puts you in a position to start helping the planet.

Many thanks to the organisers of the Mock COP event: York Environmental Sustainability Institute, the volunteering team from Careers and Placements, the University of York Science Education Group, Department of Education and Sustainability@York

Share
Latest Blogs
Spelling success! How one adult student embraced dyslexia to inspire her Fashion BA at York College & University Centre
Come and experience College life on one of our Taster Days
Did you know that we offer degree and higher-level qualifications?
Calling all year 11 students! Why our York College Open Event is for you
What is it like to study an apprenticeship? Hear Olivia's story.
Back to blog articles
Follow us for the latest up to date news
Tweets by york_college